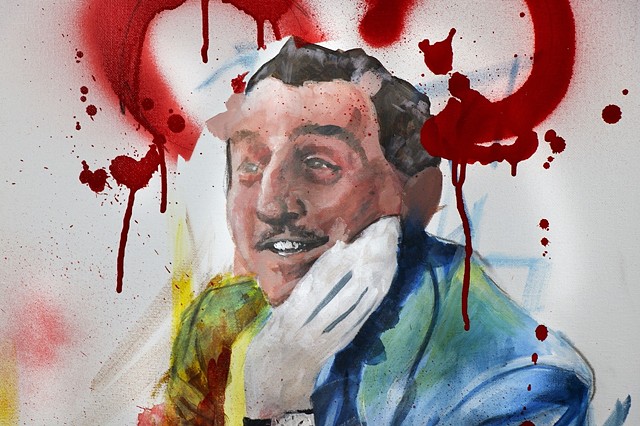 Art dealing with sexual themes has been covered by many artists over the years. However, my current body of work focuses on Social medias projection of the importance of toxic idealization of nostalgic characters from popular culture, as well as the specific role of females in media through contemporary expressions of eroticism, exploring how erotica shares similarities between past and present. Expressed through mixed media and incorporating overlapping historic and current imagery, this work shines a light on popular culture obsessions such as Comics Vintage Pin-ups and Art, Anime, Manga. Idealized women are a popular theme in today’s society It creates an exaggerated idea of busty young women who commonly look overly tempting and sexy. This type of idea can be traced all the way back to the Edo period in Japan all the up to western pop culture in the 50s and 60s. What artist had started illustrating years ago and its projection onto modern pop culture and art has created these images of idealized women who are and were viewed by men specifically.

I want viewers to be shocked by the acceptance of sexualization of young women in popular culture and be educated on this ongoing trend as well as its impact on popular culture. Falling into the genre of feminist art, both past and present works have experimented and began to shine a light on not only the idealization of the female body, but also the idealization of fictional characters. Drawing attention to our own makeshift idols we as an escapist society have created. Escaping through our own ideal characters of innocence or purity in man and sex appeal or victimization through circumstance of women. My past work mainly pertained to women portraying as victims of men/society through popular culture. Continuing with popular culture as my subject matter, I want to compare and contrast the treatment of both male and female characters as well as the inflated idealization of these fictional characters. From here keeping the same style and various mediums I will continue to shine a light on the toxic underbelly of popular culture that we as a society use to escape our own monotony and outward projection.